With 18 days left to 20th November, we do not want to lose more lives in road crashes to remember; we want to live our lives together!

If you cannot be disciplined on the road, then where else can you be? As this is a matter of life and death!

Uganda Professional Drivers Network (UPDN), The Inter Religious Council of Uganda (IRCU), Ministry of Works and Transport, Uganda Police, KCCA, UNRA, Ministry of Health and other road safety industry stakeholders as driving schools, Drivers Associations and others since 2019 have been organizing The National Day of Remembrance (DoR) for Road Traffic victims in Uganda.

The WDoR 2022 is meant to provide a platform for road traffic victims and their families to:

What have we achieved since we started coordinating this important National commemoration event?

In 2019 at the Railways square, we advocated for improved post-crash response for road crash victims in Uganda. At the time, only about 7% of road crash victims reached the hospital aboard an Ambulance with over 93% of victims reaching on boda boda and police pick-ups both methods scientifically known not to save victims with head damages, hence so many victims again died between the crash scenes and the hospitals.

Out of this advocacy, entities as The Uganda Red Cross society increased the number of their ambulances and equally The Ministry of Health that even started deploying some ambulances on selected highways. The Uganda Police did the same, including training staff on post-crash response. We now have 11% or slightly higher of victims now reach facilities for medical attention aboard ambulances.

In 2020 at The UNRA Grounds in Kyambogo, Kampala; stakeholders called upon Government to operationalize a road safety action plan, consider focus on regulation of commercial drivers/riders and driver training schools.

In response, Government in 2021 announced plans for automated driver training and testing and extended commitment to PPP to achieve this. The Ministry of Works and Transport also committed to fast track the implementation of The Amended 2020 Road Safety Act, especially by providing regulatory framework for driver demerit systems, commercial driver organizing, boda boda regulations, etc. 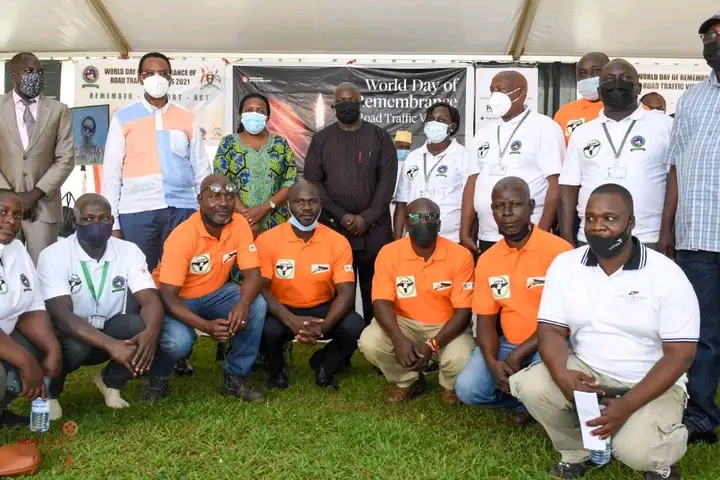 In 2021, again at the UNRA grounds with support from Bloomberg Philanthropies through KCCA. The Minister for Works and Transport as Chief Guest; stakeholders insisted that Government should quickly consider introducing regulatory framework for boda boda  training and operations as the country started a new Decade for Road Safety aiming at reducing road crashes, serious injuries and deaths by 30% come 2030.

The Minister committed to fast tracking issues like 30km per hour speed limit in built up areas, he said Uganda was able to achieve 40% reduction in one year, if every stakeholder played their role towards the same. We recently saw all Government agencies supporting Ministry of Works to regulate boda boda operations in Kampala!

Traffic law enforcement, thorough investigation after a crash to find out if a crime was committed and to prevent recurrence. Criminal prosecution where appropriate and civil compensation are all part of the justice system. When carried out seriously, fairly and consistently, such a system is what road crash victims who have been injured or had a family member killed as the result of someone’s law–breaking or negligence deserve and wish for; since it also represents a main factor of prevention and this would mean that lessons are learnt from their tragedies so that they may not be repeated.

Support us achieve this cause and Join the stakeholders at The OLD taxi Park on Sunday 20th November, 2022 from 9:30am-12noon

This will close in 20 seconds